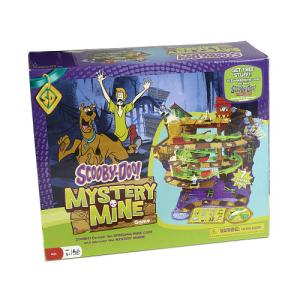 Scooby-Doo and the Mystery Inc. gang our involved up to their necks in their next mystery. There is some strange things going on at the Mystery Mine and Scooby-Doo and crew are on the case sniffing out clues and looking for leads.

Beware as there are 8 traps along the way and danger is a plenty! Which of the suspects did it? Which of the gang is going to be the first to figure out the mystery? Will it be you? 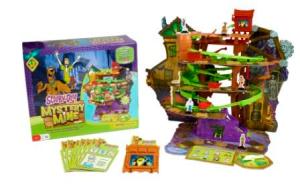 My daughter who is 11 years old and I LOVE Scooby-Doo! We have all the movies, TV Series, some of the toys and most of the games. It’s what we do with our time together a lot of the time. She really wanted this game for Christmas so of course she got it. We have the other game like this called the 3-D Haunted House Game which we love so we were excited to play the Mystery Mine Game.

The players have the choice to be any of the Mystery Inc. gang. As with the other game, movement is decided by a spinner. As you move through the mine, you encounter clues that help to reveal the culprit. You also encounter 8 different traps that will slow down your investigation so be wary! The first player to the top of the mine will be able to guess who the culprit is and will have hopefully seen the three clues needed to make the accusation. The first player to get it right wins.

Granted these games are very simple and easy to play and understand which is why it saddens me to say that my experience with this game isn’t really a good one. First off all, the game fluctuated in price greatly during the holiday season. It had gone up as much as $10 dollars at Target. Secondly, the cart that rolls down the mine shaft doesn’t really work. There is a trap immediately after the release of the cart and it stop the cart every time from progressing any further. I would have to physically hold the first trap up to allow the cart to have a chance at moving down the mine shaft. The second trap veers the cart down one track or another and it often stops the cart entirely. The cart only makes it’s way down the mine about 25% of the time which in turn negates the need for the other traps.

While I and my daughter finished a few games of this, it wasn’t worth the $29.99 MSRP when the game doesn’t actually provide the experience it is designed to. For a simple game, with a fun theme this one falls flat. You’d be better of just getting the Scooby-Doo Mystery 3-D Haunted House Game and leaving it at that. Putting out a game based on just a license to generate sells isn’t often a good idea and that is what happened here. It obviously wasn’t play tested enough to work out the kinks and sell a workable game.

We are giving the Scooby-Doo Mystery Mine Game 3 out of 10 stars.